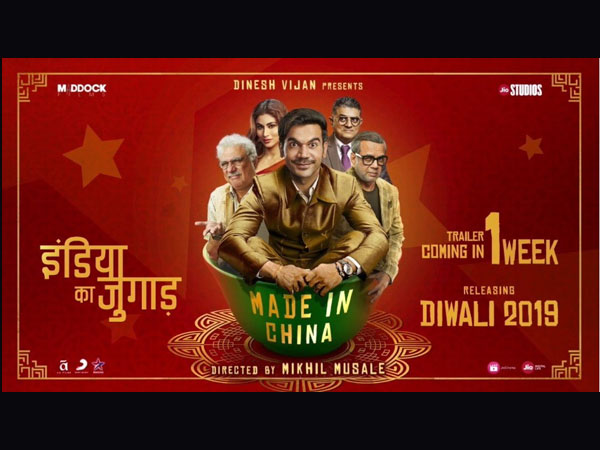 After giving a powerful performance in the movie Judgemental Hai Kya, Rajkummar Rao is now present with the film Made in China. The motion poster of the film has been released. Mouni Roy is opposite Rajkumar Rao in the film. The poster has been given the tagline- ‘Jugaad of India’.

Boman Irani, Gajraj Rao, and Paresh Rawal are also seen in the poster. Boman Irani, while sharing the motion poster, wrote – This Diwali, India will have a Soup-er Hit !. Along with this, he has also made a soup bowl. The trailer of the film will come next week.

Many changes have been made to the film’s release date. However, it seems from the latest poster that the film will be released this Diwali. Please tell that Housefull 4 and Bull’s Eye are going to be released on Diwali weekend. The film is going to get tough competition.
In the film, Rajkummar Rao’s name will be Raghu and Mouni Roy will be named Rukmani. In the film, Rajkummar Rao will be seen in the role of a straggler businessman from Gujarat. Mouni Roy is from Mumbai and comes to Ahmedabad after getting married. She persuades Rajkummar Rao to go to China so that she can progress in the business. After this, Prince Rao goes to China.
According to reports, the first schedule of the film was started in Ahmedabad with 200 buffaloes. Mikhail Musale is directing the film. Dinesh Vijan is producing the film.